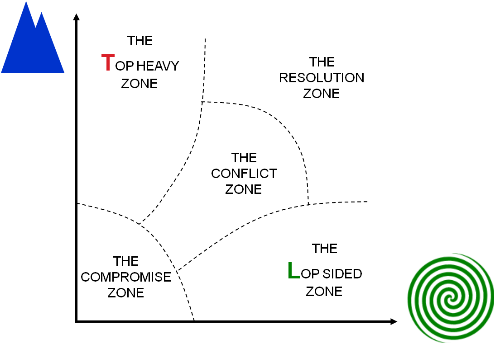 In a genuine dilemma there is an entanglement between the two values and their associated situations because the dilemma itself is a manifestation of a deeper structure. In fact, the underlying structure is a systemic one in which unseen feedback loops create unexpected consequences. If the advocates of rock values “win” (that is dominate) then at some point in the future the feedback from the whirlpool realities will catch up and cause defeat. If advocates of the whirlpool values prevail then sooner or later the rock realities will catch up and cause defeat. Dilemma resolution requires a dynamic and non-linear process that emphasises ‘both/and’ rather than ‘either/or’ by a process we call the dilemma dance.